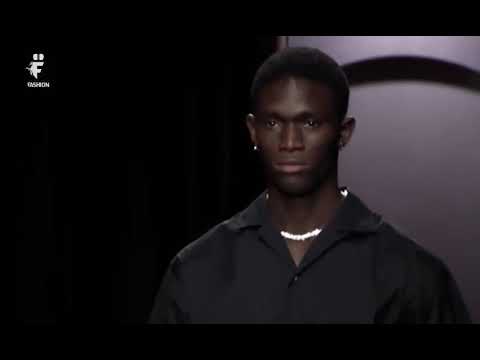 The ebullient Caten twins’ quicksilver energy was apparent in tonight’s fast-paced show, where a fire-red light bathed the showspace, crossed by a lacquered glossy catwalk. The setting suggested not only an obvious Chinese inspiration, which was reflected in the collection, but also an intensity and a combative attitude, expressed in the press notes’ headline: #RED2 Warriors In A Summer Garden.

Bruce Lee was also in a sort of metaphysical attendance, like a spirit animal hovering over the collection; at an earlier preview, the twins sported identical (obviously) T-shirts printed with an image of the most influential martial-artist of all time, worn with the same chinos with printed satin boxers peeking up from the waistline—a look replicated throughout the co-ed show. “He bridged the gap between the East and the West, between the ’70s and the ’80s he was a true pop culture icon,” said Dean—or it was Dan? It’s difficult to extricate their tightly intertwined sentences.

Asked why China was so prominently referenced in the show, they fired back: “Because it’s sexy! And there’s something rich about it.” No arguing with that. The Catens’ take on Chinese iconography and shapes had the sexy edge one expects from a label with a taste for bold provocation, but it wasn’t served in a predictably overt way. “No, no, no! We do not like to be predictable!” they exclaimed in unison. And actually, they riffed convincingly on the rich, sumptuous, decorative side of Asian iconography, filtered through an ’80s lens and given a brash, cheeky twist.

Chinese-inspired traditional motifs of paper animals, tiger-striped camouflage, peacocks, and lucky-charm monkeys were used. Humongous chrysanthemums were blown up and shot with bright colors, printed on shimmering gold lamé or on a black background of silk satin or intarsia leather. The opulence was further amped up in a floor-sweeping padded and patchworked silk kimono, a statement piece which prompted a Wow! exclamation, worn with tight distressed jeans, a Bruce Lee-printed T-shirt, and impossibly high, laced-up fire-red stilettos—an otherwise endangered species on global catwalks.

Watch and read the whole reportage at

This is been produced and Brought you by:
I.F.N. – International Fashion Network
Rome Fashion TV